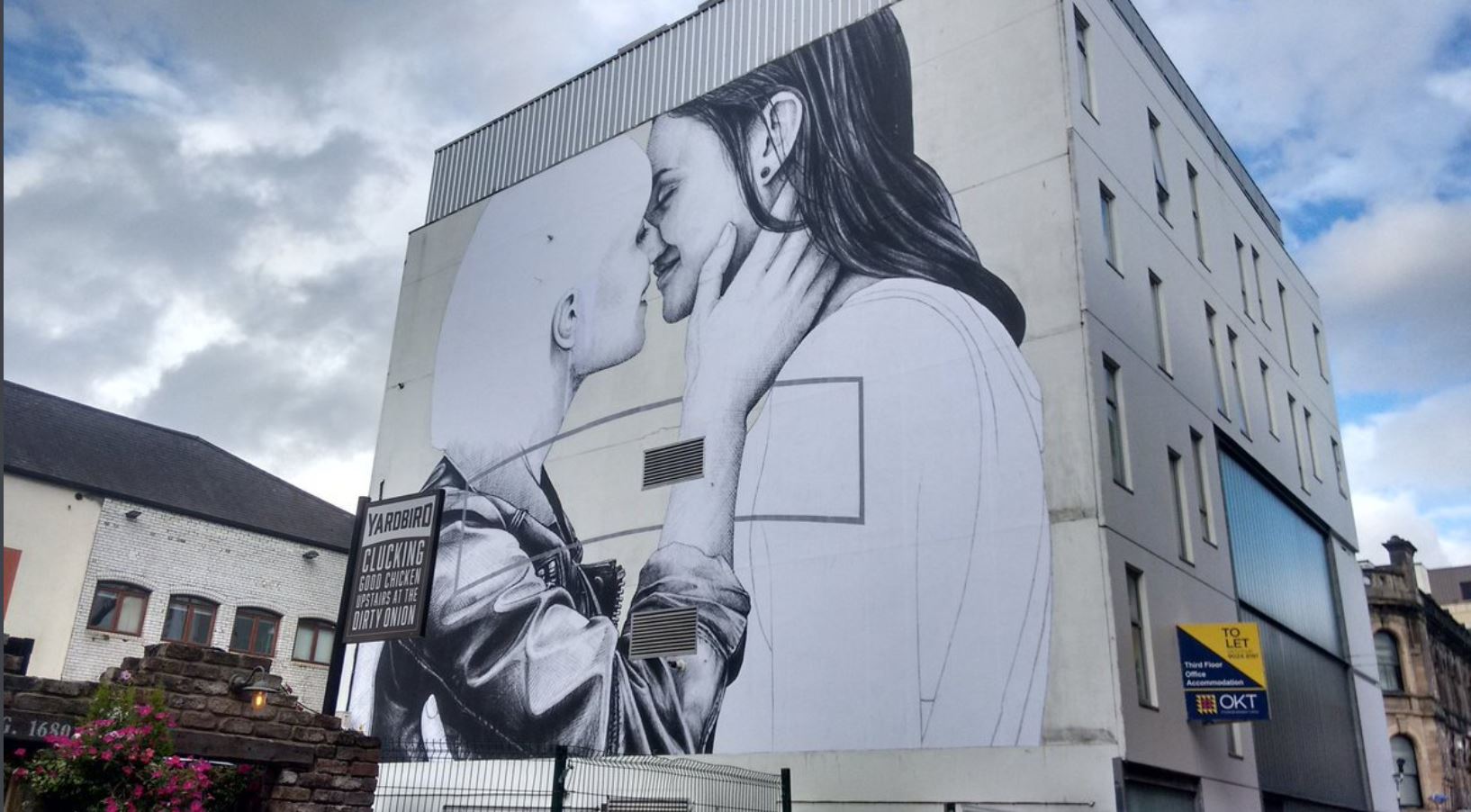 As a secondary school art teacher in Tullamore, County Offaly, Joe spoke about the desperately high suicide rates he encountered while teaching. This, along with one student’s emotional outburst, images from 2011’s London riots, and Trayvon Martin’s controversial murder in Florida, inspired Caslin to begin creating ‘iconic images for young men’ which led to the project ‘Our Nation’s Sons’.

Making up part of his MFA in Illustration at Edinburgh College of Art, Caslin began to turn his illustrations of young men into huge images, pasted around Edinburgh and Ireland. Lack of sleep, being mistaken for a religious cult, and surprisingly generous offers from Edinburgh City Council, were just a few of Caslin’s stories about the project.

You can spot some of ‘Our Nation’s Sons’ pieces, on a forgotten cottage in Galway, Aghill Island’s own ‘Stonehenge’, and a church wall in Waterford. Some paste-ups are in better condition than others; completely biodegradable, the paper and paste (made from spuds – how Irish) used to create the massive works of art, are at the complete mercy of the Irish weather. With this, brings the unique opportunity to create art on historic buildings, causing no damage and leaving no trace.

After the success of this project, and the attention brought to mental health issues in young men, Caslin found he could be an advocate for other issues affecting Ireland. The impending same-sex marriage referendum, spurred him on to create two more monumental paste-ups; the first on a gable wall in the centre of Dublin, depicted a gay couple embracing. The image was based on Sir Frederic William Burton’s painting ‘The Meeting on the Turret Stairs’ and amazingly, Caslin used the motif from the painting’s ornate frame, in the tattoo of one of the men depicted in his own piece.

Installing the art did not come without it’s problems; the takeaway who own the gable wall caused some issues, and Dublin City Council threatened Joe with legal action if he went ahead. Fortunately the positives outweighed the negatives; the Gardaí closed off several streets to help speed up the process, and an incredible 59,000 people signed a petition to make the artwork permanent, with only 7 people objecting.

The second piece, featuring a female couple, went ahead with much less objection, on a 15th century castle, in rural Galway.

Then on to Belfast, a city already renowned for it’s large scale murals. Joe was approached by Smirnoff who proposed another LGBT themed paste-up to coincide with the city’s annual Pride festival. Before settling on it’s Hill Street location, a few other sites were considered; the Crumlin Road Courthouse, T13, and the old Bank of Ireland building on Royal Avenue. The property firm responsible for the derelict bank were all for the project until discovering the pro-LGBT subject matter. Needless to say, Northern Ireland’s archaic politics, and still very present homophobia, played a part here.

Despite the setbacks, the artwork’s eventual home on Hill Street, was met with great enthusiasm, and four months later, remains a positive talking point in the city.

As for the future, Caslin’s next project ‘The Volunteers’ will be somewhat based on the 1916 Easter Rising and will tackle themes of mental health, drug addiction, and direct provision (Ireland’s less than ideal system for dealing with asylum seekers).

Joe’s lecture was fantastic and covered so much more than this article mentioned. It was a pleasure to listen to such a knowledgable, passionate, and droll artist, who not only creates art as a form of catharsis, but as a medium to shed light on often overlooked issues in Irish society. He was emphatic in thanking his team; his friends, family and often the subjects of his illustrations, who all play a part in the process of this work.

Regarding street art in Northern Ireland, he had this to say;

“The urban art culture in Northern Ireland is changing; moving away from ritualism and religion, into a space of empathy and compassion. And it’s an important change. A change into a better place.”

Keep up to date with Seedhead Art’s events, and upcoming Faculty Lectures on their website.

And find out more about the Northern Ireland Human Rights Festival here: http://www.nihrf.com