Will you introduce yourself?

I’m Chris, I’m a work in progress, artist from Slaght in Northern Ireland.

How did you get into stencilling?

So I’ve always enjoyed drawing, painting, tattoo art and writing on things but kept it to myself pretty much.  About 5 years ago after watching ‘Exit Through the Gift Shop‘ I tried cutting a stencil. I like figuring out processes and try to always be evolving to keep it interesting for myself. When I posted it online it got more love than I was expecting and someone else asked could they have one done and it’s kind of just grown organically from there. I’m diagnosed with BPD and always found that making art of any kind really helped settle me and gave me something to pour all the excess manic energy in to. I’ve found cutting stencils more than any other medium really helped slow things down to a more manageable pace and quickly became a form of therapy in a way. It’s something that I’ve always done primarily for me and the fact other people like it now is just an added bonus.

Did you study art?

I’ve no formal art training.  I read a lot, watch documentaries, YouTube tutorials and I listen to people that’ve been in the game longer, that counts as studying. I’m always learning.

Where did the name ‘Stanley Sprays’ come from?

Whenever I started out I used a Stanley knife to cut the stencils and well, the sprays bit’s self-explanatory. I wish I’d a better a story for it but basically I didn’t want to use my own name and I like alliteration .

Do you have any influences, artistic or otherwise?

I have a lot of different influences; on a personal  level my next door neighbour who babysat me as a kid was a watercolour artist, my dad and my brother are both very talented artists . I’ve always been into my music so album artwork is probably one of my earliest influences I’m a big fan of Raymond Pettibon who did Black Flag‘s artwork and the cover to Sonic Youth’s ‘Goo‘, he works predominantly in black and white (a preference that I share).

I love R. Crumbs‘ artwork too in particular the ways he’s not afraid to get personal, exorcizing his own demons and shortcomings in his work, again something I find relatable and therapeutic to an extent.

Tattoo art has always fascinated me too and is a big influence.

I’d say my approach to both Black Hearted and making my art now in terms of the business side of it, is influenced by the DIY punk approach of what Ian Mackaye did with Dischord Records. As in, figure out how to do it yourself, put in work, don’t get greedy, don’t get caught up in hype or what anyone else is doing, collab with like minded people, always put  some money back into the next step and just aim to stay constantly moving forward.

Will you tell us about Black Hearted Clothing Company?

I’d designed a couple of t’s about a year ago but I just didn’t have the time to put into it as a project on my own so it was put on the back burner .I  found that it’s a lot more work than just coming up with a good design in terms of behind the scenes stuff so I teamed up with my good friend Guy Wall and between us we design and print limited runs of t-shirts, raglans, hoodies and beanies inspired by tattoo culture, hard-core punk bands we like, or hip hop. Again we’ve grown organically and are still very much a work in progress but we’re growing steadily and are having fun. 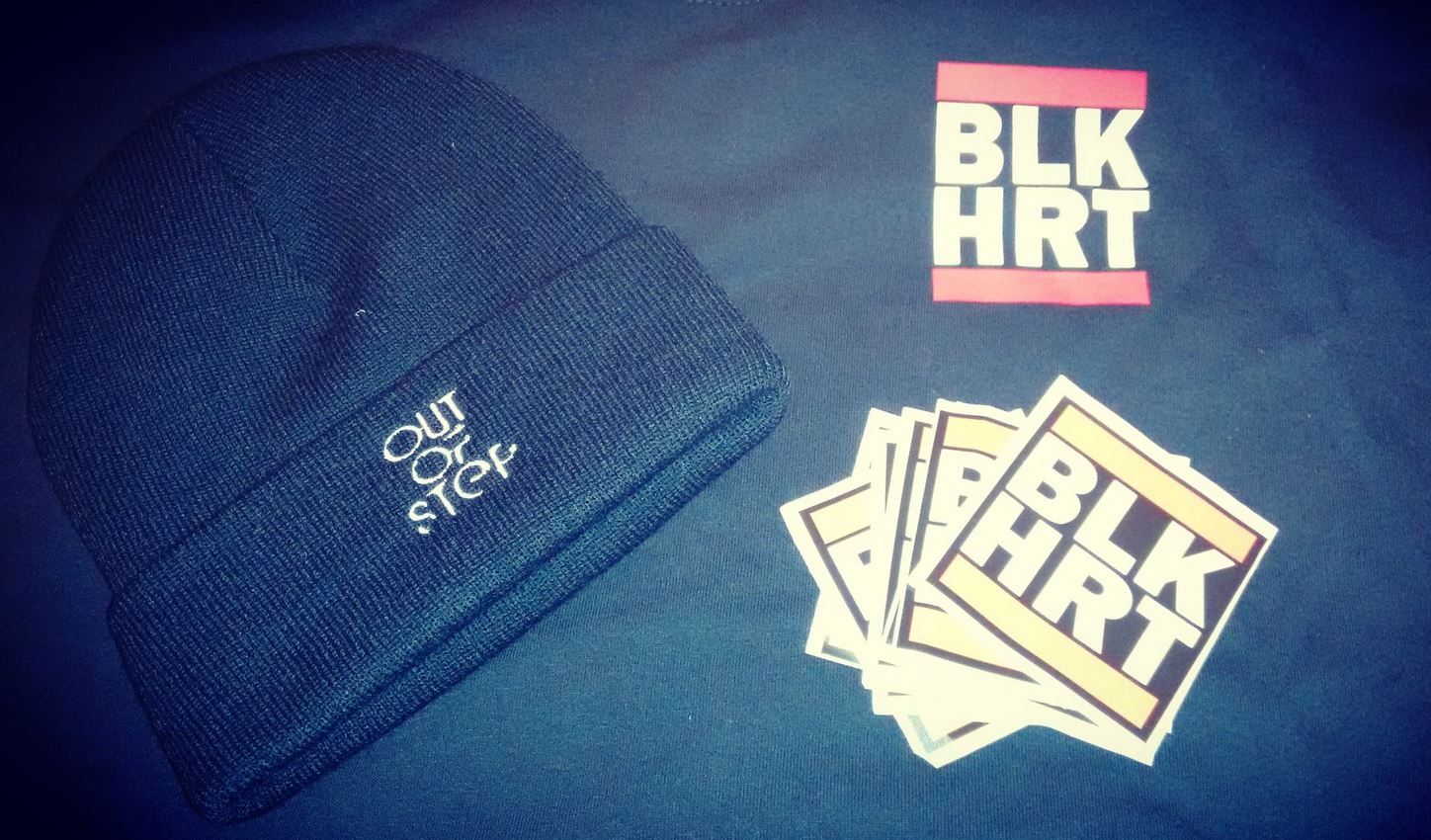 From your initial idea, to getting your design on a wall or product, how does the process work?

With the stencils it really varies, sometimes it’s a super quick turnaround;  I do a lot of single layer stencils for the local skaters, boards, broken boards, grip tape, then tote bags, upcycling old LPs, and instruments, even a bit of branding. Then most of my commission work would be larger multi-layer pieces so obviously they take a lot longer. The actual spraying part takes minutes, the design and cutting part takes hours.  Process wise for commissions people generally send me a photo and I make it into a stencil in Photoshop, print it A5 then use projector to trace outlines, cut stencil and spray it. For my own stuff its usually hand drawn and hand cut and always 101 versions before I settle on one so takes a bit longer .

With the clothing side of things drawing up ideas and refining them can take anything from a few hours to a few weeks. Once its finalised I use local printers and make up prototypes, then we post pics online and do pre-orders so only ever making up what we need, and any surplus funds the next designs. It’s usually a 10 day turnaround from customer ordering to them receiving it.

Do you use digital resources more than you used to?

Yeah definitely I was born in ‘78 and didn’t own a computer until 2006.   l carry a notebook everywhere full of random ideas and sketches that’s how most of the Stanley and Black Hearted stuff comes from. I have a basic knowledge of how to make stencils on Photoshop; YouTube tutorials for the win! I’ve recently got my hands on a graphic tablet and projector so always trying to evolve, albeit at my own pace. The only social media I use now is Instagram; I prefer the format, less words more pictures and its brought me some really cool opportunities to work with likeminded people from all over.

You recently painted at Upfest; how was it? And are there any other places in the world, or events you’d love to paint at?

Upfest was amazing; Bristol’s always had a strong street art scene and was where a lot of my favourite music from the 90s was coming from, there’s just so much really great work going on everywhere you looked. I usually paint on my own and wasn’t sure how I’d cope with the crowds of people walking about but everyone I spoke to was really cool; loads of great conversations with folk from all walks of life, I really felt in my element for once. I had a bunch of friends there to support me, shout out the Black Heart Crew and TFA, the whole weekend was great craic. I ended up painting both days just cos I was enjoying myself to be fair I probably preferred Saturday’s piece but hey I was living in the moment; met some really cool people and had a blast, will definitely be applying next year again.

No specific events in mind but I’m open to painting anywhere if the opportunity comes up.

Do you think Belfast will ever be up there with the likes of London and Bristol, as a city renowned for its street art?

Ive never been involved with the Belfast scene but I’d say it’s a bit of an unfair comparison as Northern Ireland in general is a bit behind the times with most things. Belfast has a much smaller population therefore has less people who make art, so has to rely heavily on the same groups of people working together. I also think Belfast will always have that historical element linked with the political/tribal themed murals that London and Bristol never had which gave them a good head start on the more innovative stuff .

Do you have a favourite wall or piece of art in Belfast?

What are your upcoming plans?

Just to stay active and keep progressing, try to get to grips with digital drawing. New Black Hearted clothing releases will be dropping soon; I’m finishing off a pet commission which I always enjoy doing. I’m working on a series of pieces for a mental health website and publication.

At some point in the future I’ll put on my own DIY exhibition. I’ve a pretty big body of work that people haven’t seen any of yet so I just keep working towards that in the background it’ll happen when it’s supposed to.

And finally, is there anyone you want to shout out or anyone we should check out online?