Glen Molloy has gained popularity over the last several months after his murals of famous faces started appearing around Belfast. Belfast Beyond caught up with Glen to chat about his background, the criticism of his work, and what’s next for the ‘Belfast Banksy’.

Will you introduce yourself?

My name is Glen Molloy. I’m 46 and from Belfast. I would say I’m sort of a hybrid of a graffiti artist and a street artist. I have no formal art training, and my work is practically all non-funded.

You were a DJ for many years; how did you make the transition from DJ’ing to art?

The DJ’ing came to a very swift halt because I have severe, chronic tinnitus. I’ve had it for years but I still actively DJ’ed up until 2010. It was something I hung on to that maybe I shouldn’t have. I’ve done stuff with David Holmes, Carl Cox, I was running illegal raves in the town and skate park, DJ’ed in the Art College, the Ulster Hall raves, the Black Mountain raves, and the DMC Mixing Championshsips. But with the tinnitus, I was on the verge of an international career, and then suddenly signing on. Last year I sort of came back from obscurity and played three of the biggest gigs in the country; Battle of Manchester, Belsonic, and 20 Years of Kellys. Before DJ’ing, I was tagging, and painting trains and track-sides but I stopped painting to do the DJ’ing. Now I think maybe I should have just kept painting. Being a DJ was something that came very easily to me, and I became very confident at, but with painting, I’m not a natural. I then took on a few ‘normal’ jobs, working in a bakery, fundraising etc. I was doing some market research for Ipsos Mori and was asking people their opinions on dog shit; I just said to myself, “Surely there’s more to my life than doing surveys about dog shit?” Then I painted a shutter for somebody and that was it.

You mentioned you had no formal art training; would you say you’re self-taught?

Unless I can learn something myself, I can’t do it; I can’t be taught. I’ll see something, struggle with it, then break it down and figure out a way I can do it. I’m not caught up in my own ego, I know if something I paint is bad! I’m under no illusions and not everything I do is good, but I’m still learning and I haven’t reached my full potential. With DJ’ing I had mastered everything and there was nothing left to learn, but it’s different with my painting. 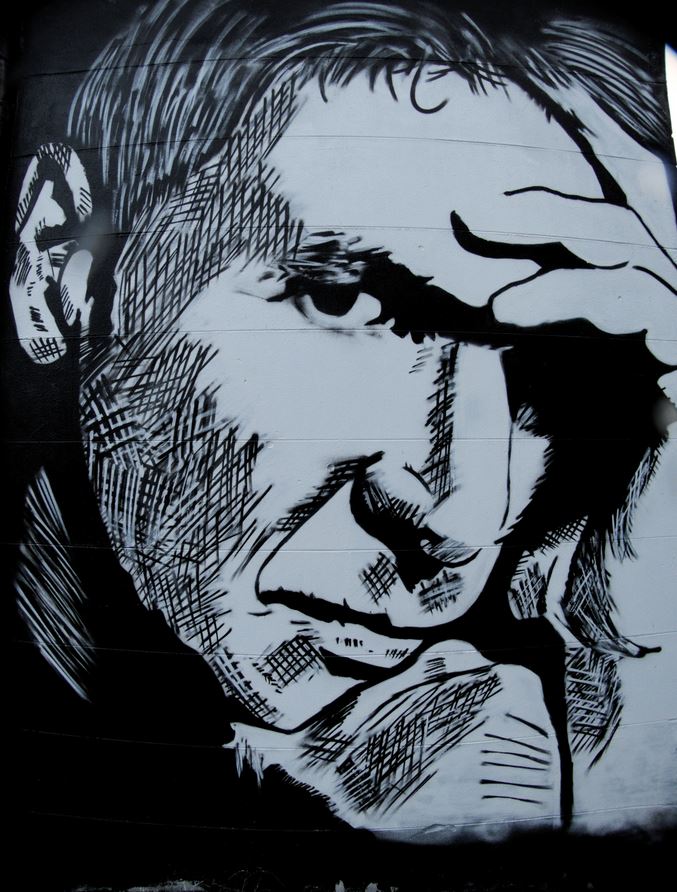 Have any artists in particular had an influence on you?

Guys like BG183, and How and Nosm from Tats Cru. A guy in Brazil (Eduardo Kobra) painted a huge wall in Rio for the Olympics (‘Las Etnias’); I want to figure out how to do stuff like that.

What challenges come with getting your art on a wall?

People forget I’m doing the majority of this in the rain, and in the middle of night! WhenI I was painting ‘The Legends Wall’ there were times at 3am or 4am when I felt myself nodding off, nearly falling off the ladder. With other walls and shutters, surfaces can be irregular; with the Princess Leia wall, it was like looking at a game of Minecraft!

Have you encountered any dangerous situations?

I’ve painted where I was never meant to, been chased, been in scuffles, been arrested. I was painting right through The Troubles in the early 90s, trying to go all-city in a city that was at war. 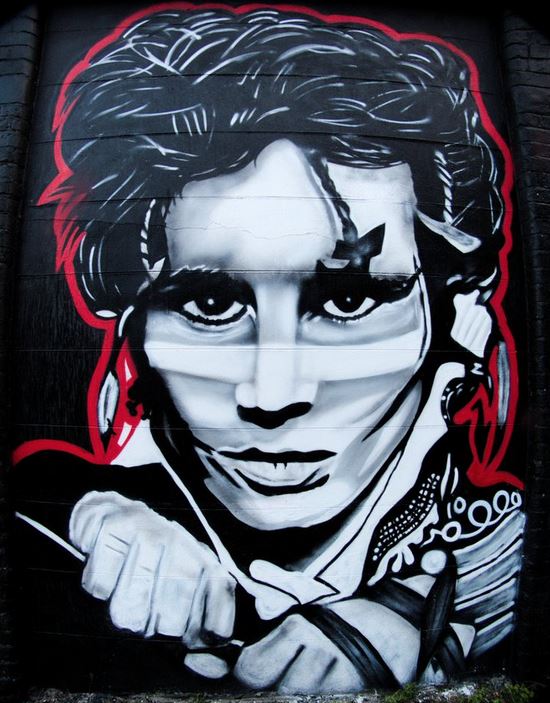 How did you choose who to paint for ‘The Legends Wall’?

I just chose who I thought I could paint! Very shallow, nothing conceited!

And how did the ‘Homeless…No Less’ piece come about?

It came from a personal reaction to something; twice in a short period of time, I saw people giving a hard time time to some young guys on the street. I see people coming out of the Opera House, the Crown or the Europa, having a fantastic time, dressed up, buzzing, with no reason to be hateful, and I don’t want to just let these things pass me by. So that piece was to raise awareness. It wasn’t about me, or my art.

Are there any other issues you’d like to bring attention to with your art?

I’d like to do something surrounding mental health. I want to help everybody that I can with my art. I don’t want my art to be offensive to anybody. What I’m trying do is positive for me, and hopefully for other people.

What, in your opinion, is the difference between street art and graffiti?

Graffiti is a higher discipline than what street art is. You could photocopy an image, paste thousands of them up on the walls, and eventually you’re going to become famous and collectable, like Obey Giant for example. The mentality of graffiti art is completely different; it’s a rebellious act, an act on society, on injustice, an act of revolt. Everyone wants to be famous but here is a way of being famous for what you do, not for who you are; famous but also anonymous. Street art can be anything from a little figure with a flag, sat on top of an electric box, to some paint thrown at a wall with something controversial written on top of it. Whereas with graffiti, you’re taking a letter, a really uninteresting thing, and taking it away from it’s original form. Writing is the hardest discipline; it has to be fresh, stylish and original. 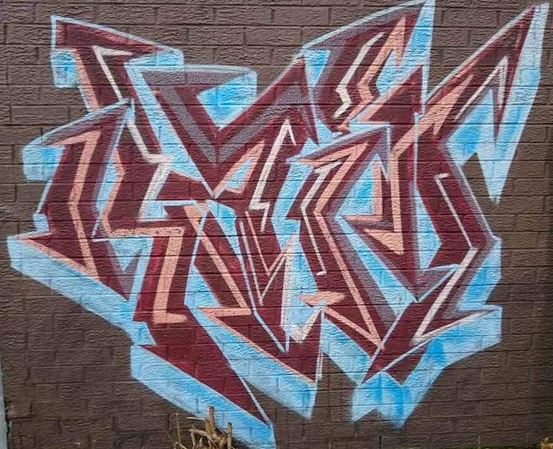 Why is there some contention between graffiti artists and street artists?

People say street art is the illegitimate child of graffiti; if it hadn’t been for the subways in New York, we wouldn’t be having this conversation now. The mentality of graffiti artists is a bit like ‘if it wasn’t for us, you wouldn’t be here, and we don’t think we’ve been given the credit and respect we deserve for what we’ve done’. What they do is considered a crime even if it’s beautiful. Street art is acceptable even if it’s ugly or contentious or whatever. So if you do street art, here’s the red carpet, and if you do graffiti, here’s the handcuffs. There’s beauty and there’s a beast. Graffiti in it’s rawest form is beastly, but it’s still beautiful.

There may be an element of fear and intimidation as well; you’re dealing with people with degrees in fine art, and studied everything under the sun. It’s a war of egos.

Is there anywhere in the world you really want to paint in?

Anywhere…if it’s a wall, I’ll paint it! I’m trying to arrange some things in Dublin and Derry. I’m trying to sort out going to Copenhagen, Denmark. My mate has a skate park there and I’m hopefully going to be doing a big Dave Mirra piece; he was like the Picasso of BMX. I’d like to do a Joey Dunlop piece on the Isle of Man. South America, the biggest street art scene in the world…as soon as I get my passport ‘I’m leaving on a jet plane’! 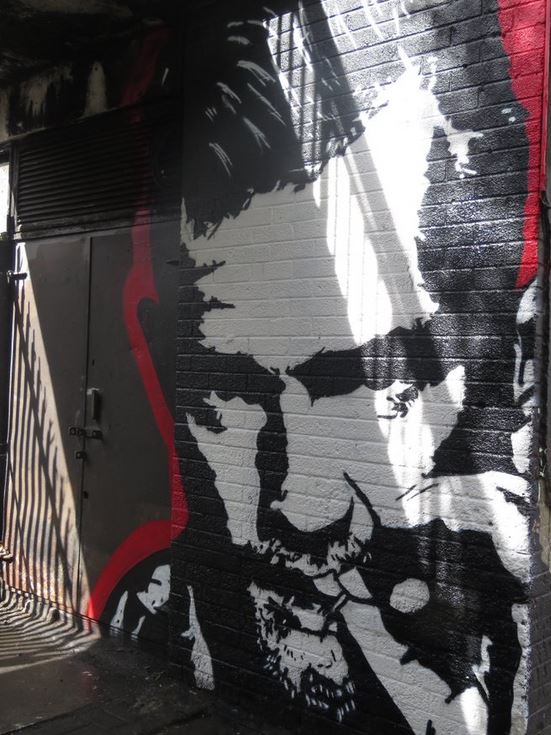 Who are your favourite artists and writers in Belfast?

Friz is amazing, JMK, DMC, KVLR, Visual Waste‘s stuff is amazing. I like Emic, I like his photo realism stuff. As for writers, the best writer in the city doesn’t even write any more; Sam Barry, a tattoo artist, Reck. Raser, Bore‘s stuff is amazing, Kanuz, Aike…oh my goodness, his stuff is incredible, Globally, Owen Dippie, El Mac, Belin.

Have you received any criticism about your art?

I’ve had a few people slagging me. Everyone’s an art critic, even aul’ dolls! Some artists and writers won’t give me the time of day but I can still respect the people who don’t like me. If someone paints over my stuff, I don’t lose anything; I’ve got the photos, the press, the commissions off the back of it, I’ll just go paint something else. People like to judge you; when you start judging people, you stop loving people.

When I was painting the George Michael piece, I had people ask me why I was painting a gay icon; I painted that because I love his music. I’ve seen a lot of hate towards him because he was gay so I painted that to show some love for him. I can either sit in the house and fester and be a hater, or I can get out there and be an object of hate. I can handle it.

I’m moving towards painting in daylight! Also it’s a bit morbid painting dead people all the time; people ask how I start my day; ‘Well I check the obituaries!’ So my paintings will be more about ‘life’. I’ve always wanted to paint beautiful things in horrible places; I grew up around industrial East Belfast, around the shipyards, so everything I saw was grey and bleak. If you put something beautiful in a run-down area, the beauty is going to resonate. I don’t want to just do one particular category of art; I want to do stencils, free-hand, grids, abstracts, landscapes, animals, people…everything.

I would like to eventually sell my art and be in a better position. The most important thing is my wee boy, and setting a good example for him. My main agenda is to better myself.